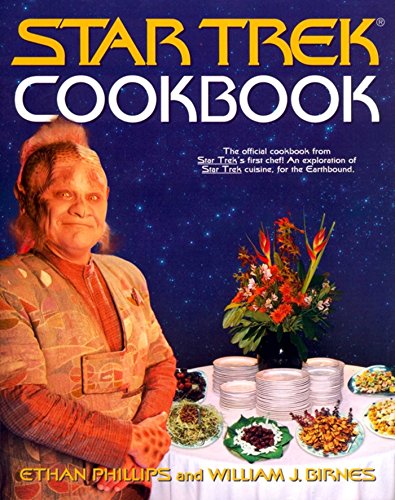 Is there one food that humans, Klingons, Bajorans, and Vulcans would like? If so, what would it taste like? How would you prepare it? Could you find all the ingredients locally?
This is the task that faces Neelix, chef for the U.S.S. Voyager™, every time he takes on the challenge of trying to feed its crew of 140 food critics. But over the course of their journey, Neelix’s learned a few tricks of the trade. He had to, just as a matter of self-preservation.
Ethan Phillips, in the persona of Neelix, and William J. Birnes, the New York Times bestselling coauthor of The Day After Roswell, throw wide the vaults of interstellar haute cuisine, revealing for the first time the secret preparation techniques behind all those exotic dishes and drinks. The favorite foods of characters from every Star Trek series and movie are here, all adapted for easy use in twentieth-century kitchens. The Star Trek Cookbook also features a complete guide for whipping up the all the drinks served at Quark . CLICK HERE TO DOWNLOAD THIS BOOK FOR FREE